What do a lion, an elephant, a rhino, a buffalo and a leopard have in common? Not only are they all wild animals living in Africa but they also take centre stage in the adventurous online game Big Five. This slot boasts five reels, 25 win lines and two fast-paced features plus plenty of chances to win. Embark on a superb slot safari and explore the endless landscapes of this animalistic game.

To make sure you enjoy this exciting slot to the fullest, we recommend reading the details below. What’s more, they include valuable tips that will boost your gaming fun!

Big Five is an online slot game from Greentube with five reels and 25 win lines. Winnings are achieved when you get three or more identical symbols side by side and without interruption on one of the win lines that run from left to right.

The Symbols in Big Five

The reels of Big Five feature a selection of classic slot symbols, including the Ace, King, Queen, Jack, and 10. Moreover, some symbols including the lion, the elephant, the rhino, the buffalo and the leopard are designed in line with the slot theme.

The Wild symbol is depicted by a Mask. It can substitute for other symbols with the exception of the Scatter. To turn your slot safari into a success story keep your eyes peeled for the Africa symbol. That’s because it’s the game’s Scatter, so if it appears four or more times in a single regular spin, up to 20 Free Games will be triggered.

If you want to get your hands on the promising Free Games in Big Five, you should watch out for the Africa symbol. Because it acts as Scatter in this slot: Just four appearances in a regular spin are enough to trigger 20 lucrative Free Games. How many Free Games you'll bag depends on the number of Scatters appearing on the reels.

The Re-Spin Feature in Big Five

If you are currently playing the Free Game Feature you also have the chance to trigger the Re-Spin Feature. How? Easy! Should the first reel only show matching animal symbols the feature will be activated automatically.

During the feature all symbols on the first reel as well as all identical animal symbols and Wilds are held while the reels spin again. The feature comes to an end when all reel positions are filled with the same animal symbol or Wilds.

What is Big Five?

Big Five is a thrilling online slot set smack dab in the middle of the African savannah. On five reels with up to 25 win lines you have the chance to trigger Free Games and get your hands on mighty winnings!

Are there special features in Big Five?

Yes, two of them! Should you tempt enough Scatter symbols onto the reels in a regular round the popular Free Game Feature is triggered. That means you have the chance to activate the Re-Spin Feature provided the first reel exclusively shows matching symbols.

Where can I play Big Five?

This amazing slot action is available on the website of the popular online game provider Casino of Gold.com. Where you’ll also find a variety of further exciting, animal-themed games. Dragon’s Pearl, Prized Panda and Eagle Bucks. So, why not swing by and give them a try!

How high is the volatility in Big Five?

Big Five is a slot with comparatively low volatility. That means: Successful spins are less frequent, but the wins are a little higher than in slots with high volatility. 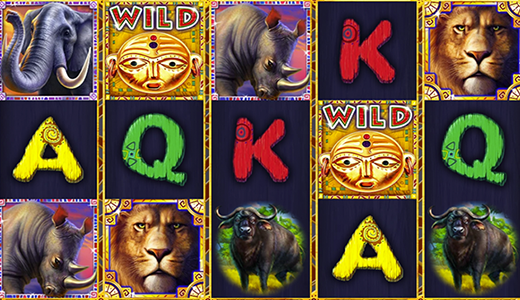