Winning chances are there for the taking in this Japan-inspired slot adventure!

Lucrative symbols and no fewer than four features await you in an imperial realm of reels. Play Diamond Cash Mighty Emperor and continue the revered slot dynasty. The magical Diamond symbol not only lends this game its name – it could also prove to be your very own lucky charm that will open the door to countless chances of winning.

Keep reading to make sure you don’t miss a thing when it’s time for you to spin.

Diamond Cash Mighty Emperor is a virtual slot machine with five reels and 25 win lines. You can achieve winnings by getting three or more identical symbols side by side and without interruption on one of the win lines that run from left to right.

There are also the Wild and Scatter, which help ramp up the fun. The former can substitute for other symbols (except for the Scatter) to complete winning combinations. The latter – the Diamond – can trigger the Diamond Cash feature, providing it appears enough times on the reels.

If you spot six Diamond symbols during a regular spin of the reels, the Diamond Cash feature will be activated and you’ll receive three Free Games. Should only five Diamonds land on the reels, they will be held in place and you’ll be granted a re-spin, giving you the chance to get the missing sixth Diamond.

Once the feature is up and running, you’ll again need to keep a sharp lookout for further Diamond symbols, for each one you spot on the reels will reset your Free Game counter to three.

And should you fill every position on the reels with this special symbol, the Grand Jackpot will be yours.

But the thrills don’t stop there, as the following three features can also be triggered while the Diamond Cash feature is still active:

A Diamond labelled “Wild” triggers this feature in which you get a free spin of the reels. Wild symbols will be scattered randomly across the reels for this single spin to elevate your chances of winning.

Get a Diamond with the “Sticky Spin” logo and you’ll be treated to a free game in which every win-generating symbol will be held in place. The subsequent re-spin will then give you the chance to target even more lucrative symbols.

This feature will be activated as soon as you see a Diamond emblazoned with the words “Colossal Spin”. The following Free Game will be dominated by a giant symbol that covers the middle three rows. Of course, this raises your chances of winning!

What is Diamond Cash Mighty Emperor?

Diamond Cash Mighty Emperor is a slot game with five reels and 25 win lines that is dedicated to Japan. You have the chance to trigger promising features and make the most of impressive chances of winning.

Is there a special feature in Diamond Cash Mighty Emperor?

Not one, but four! Should you manage to lure enough Scatter symbols onto the reels in a regular round, you’ll activate the Diamond Cash feature that, in turn, opens the door to the Wild Spin feature, Sticky Spin feature and Colossal Spin feature. Needless to say, all four of these fantastic features push your chances of winning to a whole new level.

Where can I play Diamond Cash Mighty Emperor?

This imperial slot is available on the immensely popular gaming site Casino of Gold. And that’s where you can also enjoy the other titles of the Diamond Cash series: Mighty Sevens, Mighty Elephant and Oasis Riches. Try them all out – you won’t regret it!

Which symbol in Diamond Cash Mighty Emperor is particularly lucrative?

The Diamond, for it is the Scatter in Diamond Cash Mighty Emperor. That means if enough Diamonds appear on the reels, they can trigger the Diamond Cash feature. What’s more, this special symbol performs a particularly important role within the feature itself. 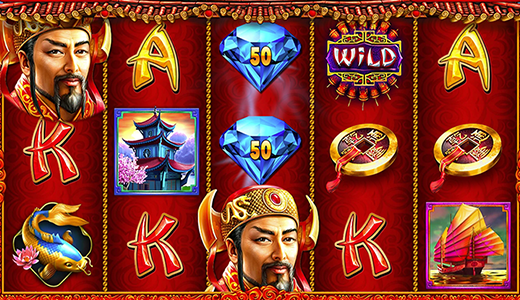