Cute fledgling, proud chances of winning: Help it to grow into a beautiful swan.

The little, grey pond dweller in Diamond Tales™: The Ugly Duckling has a problem: It looks good enough to cuddle but does not fit in with its duck siblings. But what they don’t know yet: One of these days it will turn into a proud swan and grant them rich winnings. The moral of this story: Help the fledgling so that it can help you! Get ready for five main reels and a special row, 40 lines and two features that pack a punch. There will definitely be a happy ending.

Do you want to find out more about this cute slot game? Then keep reading – we tell you in these game instructions how your duckling will become the star of the bathing pond.

Diamond Tales: The Ugly Duckling is a slot in a five-by-four format based on the well-known fairy tale by Hans Christian Andersen. You start in the basic game and can trigger two features if your luck is in to boost your winning counter. You clean up when matching symbols land along a win line from left to right without being interrupted by other symbols. You can find out how many symbols you need for this in the slot’s ingame help text. After every hit you have the chance to double your winnings in the Gamble game.

The Symbols in Diamond Tales: The Ugly Duckling

The plot located at a tranquil bathing pond revolves around a swan, a fledgling and a range of animals that love to slander. The silent witnesses of the village pond drama are the Ace, the King, the Queen and the Jack. These five special symbols ensure a surprising twist:

The Snap Drop Feature in Diamond Tales: The Ugly Duckling

As soon as you can spot Gem Hearts on the top reel and a Snap Drop symbol on the fifth reel a happy ending is in sight because this combination starts the Snap Drop feature that packs a punch with a free re-spin. All Gem Hearts show a multiplier in this round; the amount of which is determined by the Gem Hearts visible on the top reel. When the re-spin is finished it’s time to cash up: The values of the Gem Hearts won are added up and multiplied with your total bet. The winning amount is credited immediately.

After the feature has ended the total win of all Hearts is calculated and credited immediately.

FAQs: What Players Want to Know

What is Diamond Tales: The Ugly Duckling?

Diamond Tales: The Ugly Duckling is a fairy tale slot inspired by the classic Hans Christian Andersen story played on a five-by-four reel set with 40 lines and a top row. The aim of the game is to support the alleged duckling to grow into a proud swan. The story takes a turn for the better thanks to two features in which Gem Hearts adorned with multipliers create a happy ending.

Where can I play Diamond Tales: The Ugly Duckling?

Once upon a time there was a fairy tale slot on – as you might expect – Casino of Gold. Diamond Tales: The Ugly Duckling, the slot machine that retells the world-famous story by Hans Christian Andersen is one of many titles in the world of themed slots. We also recommend: Thunder Cash Voodoo Magic, Fairy Queen and Frogs Fairy Tale.

What extras are there in Diamond Tales: The Ugly Duckling?

Diamond Tales: The Ugly Duckling shines with five special symbols and two features – the Snap Drop and the Diamond Tales feature. In both you receive re-spins or Free Games to collect Gem Hearts. What makes this extra special is that all Gem Hearts in the features show multipliers that are applied to your total bet at the end. 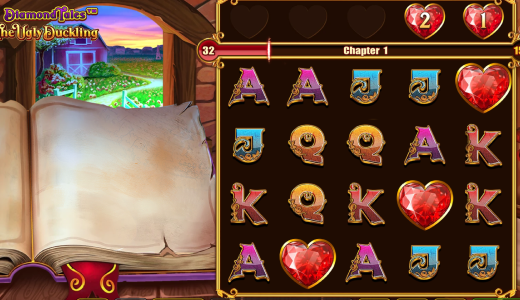