Not only chance decides in this game but also you!

How? Easy! Random Runner is a classic AWP game. That means, there are plenty of ways to create your own luck. For example, you can determine with the Hold Feature which reels will be held. Moreover, following a win you can transfer your prize to the coins meter or the super meter. You can also specify your stake amount that is played in coins.

Want to know more about this thrilling slot game? Then keeping reading the game instructions. There are some handy tips in there too!

Besides two reel sets the game has another distinctive feature: All stakes and winnings are displayed in coins. And it is up to you to set the value of a coin. A base game round is played with one coin, a top game round with five coins.

The game also contains a coins meter and a super meter. After each win you decide which one your prize is credited to. As soon as your super meter shows four coins things get even more exciting because the top game is triggered.

The Symbols in Random Runner

Random Runner offers all the symbols that make the hearts of slot enthusiasts leap for joy. The base game is a colourful fruit cocktail including a Cherry, a Lemon, an Orange, a Pear, a Plum, Grapes and a Melon joined by a Bell, a Star and a Crown. The latter is the game’s Scatter, so it can generate winnings from any position on the reels.

More fruits are twirling around the reels in the top game: an Orange, a Pear, a Plum, a Strawberry, Grapes and a Melon accompanied by a Bell, a 7 and a Star.

Oh, and by the way, the Cherry only needs to appear twice in the base game to earn wins. Moreover, should the Cherry land on the left reel it grants you between one and four coins.

The Hold Feature in Random Runner

The base game is jazzed up with the Hold Feature. How to play it? Very simple: Below each reel is a Hold button. Per round you can hold up to two reels with it. Clicking the button again releases the reels. If you want to release all the reels at the same time you can also click the Cancel button.

Reels that amount to a promising combination of two will be held automatically.

However, the Hold Feature is not available in the first round, following a win and in the round after the feature has been triggered.

FAQs: What you need to know about Random Runner

What is Random Runner?

Random Runner is an AWP slot which comprises a base game and a top game. As soon as you have collected enough winnings in the base game – the Hold Feature can lend you a helping hand with this – you will be taken to the top game. You decide how many coins you want to choose as stake and what will happen to your wins in the base game!

Where can I play Random Runner?

This exciting game can be played on the website of the popular online gaming provider CasinoOfGold.com. Head there and you’ll find even more hugely popular slot machines, like Book of Ra deluxe, Sizzling Hot deluxe and Lucky Lady’s Charm deluxe!

What’s so special about Random Runner?

Actually, Random Runner has several special features in store for you. For a start, the slot contains a base game and a top game. In addition, stakes and winnings are played in coins. The coin meter and the super meter are also not to be sniffed at. 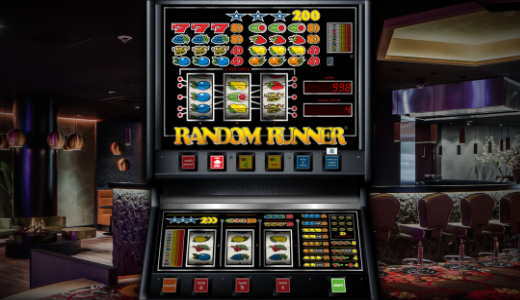