Asteroids, red and blue stars and planets with rings in the infinity of space - Shooting Starsreveals the beauty of the night sky and gives you many winning chances. Go where no man has gone before: If you can witness the expansion of a star countless winnings are yours!

Your aim at Shooting Stars is to land 5 matching symbols side by side on up to 10 win lines. The winning patterns run from left to right as well as from right to left.

The blue star is the Wild symbol, which only appears on the 2nd, 3rd and 4th reel and replaces all other symbols in the game. If at least one blue star appears on the above-mentioned reels it also triggers the Shooting-Star-Bonus.

If the blue star (Wild symbol) lands at least once on the 2nd, 3rd or 4th reel in any position it triggers the Shooting-Star-Bonus. Once this bonus has been triggered blue stars also appear on the remaining positions of the relevant reel. These will be fixed in place, while the other reels spin again. If another blue star lands it expands to the other reel positions and will also be fixed in place. This process is repeated until no more blue stars are landing. 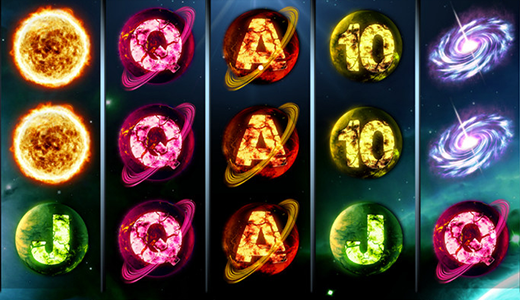