A ship full of Stars? That’s what every pirate craves. Set sail in this adventure slot and return with more treasure than you can carry!

The water is glistening in the sun, the Jolly Roger is flapping in the wind and the pirate crew is eager to depart. It’s time to plot a course for lucrative shores in Smugglers Gold. Three to five identical symbols along a win line are enough for you to haul aboard glittering Stars in this slot. While the Gold Coin symbol comes in very handy as the Joker, the Treasure Chest is certainly worth looking for through your telescope, as three or more of them activate eight Free Games.

Even the most seasoned seadog needs to know the following: Smugglers Gold is an online slot by Redline Games that features five reels, each with four positions, and 40 win lines. This game for fearless pirates really looks the part, with symbols such as the Gold Coin, the Sword, the Compass, the Bomb, the Telescope, the Treasure Chest and more waiting for your spins. Your mission is to collect enough matching symbols on one of the win lines without any other symbols interrupting them. All winning combinations must start on the first reel on the left. The Gold Coin acts as a Joker in this title, which means it can complete regular winning combinations. And the Treasure Chest is the only symbol that can lead you to winnings and Free Games regardless of where it lands on the reels. But that’s not all, for there’s even a special function called “Active Wild Spaces”, which adds Wilds to previously marked positions on the reels every ten spins.

The Symbols in Smugglers Gold online

Alongside the grinning Buccaneer (a regular symbol with the highest win value), you’ll spot Gold Coins (WILD) and Treasure Chests (SCATTER and feature trigger) in this seafaring spectacle. On top of that, Redline Gaming has found space for Swords, Compasses, Bombs, Telescopes and the classic symbols (Ace, King, Queen, Jack, 10 and 9) to ensure that you’re fully equipped for your adventurous voyage.

How to Get Free Games in Smugglers Gold

The Treasure Chests in Smugglers Gold not only contain sparkling Stars for your account; they can also help you get your hands on something even more valuable: Free Games! If the reels display three or more wooden Treasure Chests at the end of a spin, you’ll be treated to eight Free Games. The feature starts immediately and is played with the same settings as the triggering round. To up your chances of winning, between three and eight Wild Gold Coins will appear at random for each of the Free Games. And should you tempt three further Treasure Chests onto the reels, your Free Games fun will be extended by eight additional rounds.

This special function is activated in the regular game. For nine rounds in a row, it marks all of the positions on which a Wild symbol lands as Active Wild Spaces. In the tenth round, these marked positions turn into Wild symbols. With a little luck, this will generate even more winnings for you. Once this is over, the Active Wild Spaces are reset and the whole process begins again.

What is Smugglers Gold?

Smugglers Gold is a pirate-themed slot by Redline Games that features five reels, each with four positions, and 40 win lines. Your goal is to land as many matching symbols along a win line as possible and claim the gold. The Gold Coin is incredibly valuable on your adventure as a brave buccaneer, for it is the Wild symbol and can therefore help complete combinations of other regular symbols. Old seadogs would also be wise to keep an eye peeled for the Treasure Chest symbol, as three of them trigger eight Free Games.

Where can I play Smugglers Gold?

The pirate slot game Smugglers Gold has set anchor on the gaming website StarGames, but it’s eagerly awaiting it’s next adventure on the high seas! StarGames is also the place to play further sea-themed slots, such as Lord of the Ocean, Dolphin’s Pearl deluxe and Tidal Riches.

Which special symbols are there in Smugglers Gold?

The Gold Coin and the Treasure Chest! The Gold Coin in this slot is the Joker, which means it can take on the role of any regular symbol to give a potential winning combination a final helping hand. With three or more Treasure Chest symbols you can haul aboard eight Free Games – spins that allow you to hunt down winnings without having to place a stake.

What do the Active Wild Spaces do in Smugglers Gold?

This special function is activated in the regular game, and it always lasts for ten consecutive rounds. For nine straight rounds, every position on which a Gold Coin lands will be marked as an Active Wild Space. In the tenth round, these marked positions transform into Wild symbols. The winnings achieved with these symbols are then calculated and announced. Once the winnings have been paid out, the Active Wild Spaces are reset and the cycle begins again.

Are there Free Games in Smugglers Gold?

Yes! Three or more Treasure Chests win you not only sparkling Stars, but also eight Free Games. All of these spins on the house are played with the same settings as the last regular round. For every spin you play, between three and eight Gold Coins will appear at random to elevate your chances of winning. Moreover, the Free Games can be extended by getting three further Treasure Chests. 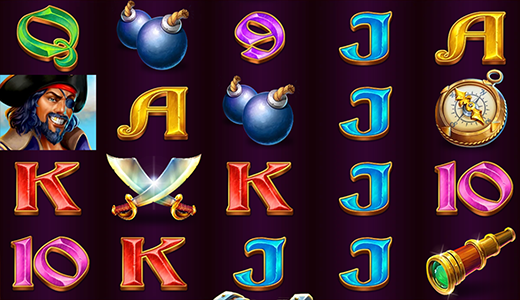