Heaven or hell? For fiery winnings we clearly recommend the latter!

Where if not in Stars Inferno will you find fruits with such enormous winning potential? As game symbols they can yield Stars galore provided they land in the right amount on at least one of the ten win lines. The Jackpot Diamonds Feature creates even more reel thrills because it might bestow one of four jackpots on you. This slot machine is furnished with everything you need for a superb slot gaming experience. Have fun giving it a try!

You can find all of the most important details about this slot title in the following game instructions.

Stars Inferno is an online slot machine game with five reels, three rows and ten win lines. Should three or more identical symbols stop on the reels and form a chain that runs along a win line from left to right, you’ll be a winner. The Scatter symbol (the Star), however, is exempt from this rule, it can send winnings your way from any position on the reels.

As Stars Inferno is a classic fruit machine spiced up with new features, you’ll see plenty of fruits on the reels. Cherries, Lemons, and Oranges are joined by Plums, Grapes and Melons.

The Bell and the 7 are also part of the symbol cluster in Stars Inferno.

And there is the Star as well. It is Wild and Scatter rolled into one and has several jobs: It can trigger wins without having to land on a win line and substitute for other symbols as well as activate re-spins.

Stars Inferno is a slot that belongs to the Diamond Mystery series. That means it is equipped with the Jackpot Diamonds Feature. In this additional game you can win one of four jackpots. Each jackpot is assigned a certain gemstone:

As soon as the feature is triggered, twelve playing cards will appear face down. Your job is to turn over the cards one by one until three matching gemstones are visible. Then you win the respective jackpot.

Stars Inferno Online – FAQs: What You Need to Know

Stars Inferno is an online slot with five reels and ten win lines that packs a punch: It merges various fruit symbols into a concentrated load of winning potential and creates huge chances to clean up with the Star symbol. And in the Jackpot Diamonds Feature you could nab one of four jackpots.

Where can I play Stars Inferno online?

You can play Stars Inferno on Casino of Gold, which is also home to further titles of the popular Mystery Diamond series. For example, you can check out 40 Supreme Fruits, 40 Wild Fire 6, Smoking Hot 7’s and 50 Extreme Hot there.

Which symbol in Stars Inferno is especially important?

Easy: the Star! In Stars Inferno, it’s not only the Wild symbol, but also the Scatter. As a result, it can stand in for other symbols, trigger re-spins and expand across the relevant reel. If you spot the Star on the screen it’s time to celebrate!

Is there a feature in Stars Inferno?

Yes, the Jackpot Diamonds feature that can be triggered at random in Stars Inferno. You’ll be presented with twelve playing cards, which you must turn over until you reveal three matching gemstones. Each type of gemstone is linked to a jackpot, which will be yours as soon as you have three. 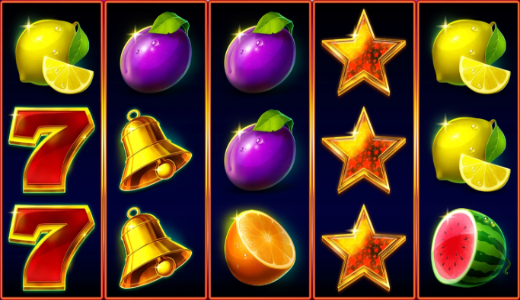