Thunder and lightning may not be so common in Egypt, but stunning winnings certainly are!

All you need to do to stand a chance of making them yours is play Thunder Cash – Book of Ra. With a pinch of luck, you’ll even activate the Lock-and-Spin feature and take home one of four jackpots. But that’s not all that’s on offer on the five reels of this slot: ten win lines provide ample space for winning symbol combinations, while Wilds and Scatters boost your chances of filling your pockets. And, of course, there are Free Games to be won too. So who needs stormy weather ruining such a beautiful landscape when you can have winnings instead!

Want to know more about this stunning slot game? Then continue reading and let the excitement and anticipation continue to build!

You can land winnings in this game by getting at least three matching symbols side by side and without interruption on one of the win lines that run from left to right across the screen. This combination of identical winning symbols must not be interrupted by any other symbols. Should you manage to get five Adventurer symbols on the reels, for example, you’ll win 500 times your stake.

That said, the Scarab, the Statue, the Mummy, the Adventurer and the Wild symbols need appear only twice for you to form a winning combination.

The Symbols in Thunder Cash – Book of Ra

Let’s begin with the classic symbols: the 10, Jack, Queen, King and the Ace can all be found on the reels in Thunder Cash – Book of Ra, making you feel at home given that they feature in countless other online slots.

But they are joined by further symbols that have been designed specifically to celebrate the theme of this title: a Scarab, a Statue, a Mummy and an Adventurer.

The Wild symbol has the ability to stand in for all of the other symbols (except for the Scatter) and complete winning combinations.

The red Book is the game’s Scatter, and should it appear six times or more in a regular spin, the Lock-and-Spin feature will be brought to life. Moreover, the Scatter need not land on a win line to create winnings for you – as long as enough appear in a single spin, you’ll be a winner.

The Lock-and-Spin Feature in Thunder Cash – Book of Ra

Coins don’t come in handy only in the real world. In Thunder Cash – Book of Ra, they can help you get closer to what you desire most. Six Book symbols are initially required to trigger the Lock-and-Spin feature in which you can start to collect the valuable Coins. Each one you spot will be held in place on the reels as three Free Games are activated. And every additional Coin that appears will also be held.

As soon as a Coin displaying one of the jackpot names appears and no further Coins can be collected, you’ll receive the corresponding jackpot sum.

However, if you achieve the feat of filling the whole screen just with Coins, you’ll be rewarded with the Grand Jackpot – the biggest possible win in the whole game.

What is Thunder Cash – Book of Ra?

Thunder Cash – Book of Ra is a fruit slot with five reels and ten win lines. A glimpse not only at the background in this game but also the symbols on the reels will immediately reveal that it is inspired by the beautiful country of Egypt. With a little luck while spinning, you’ll activate the Lock-and-Spin feature, which could lead you to landing one of four jackpots. The Grand Jackpot is the biggest of the lot.

Where can I play Thunder Cash – Book of Ra?

Is there a special feature in Thunder Cash – Book of Ra?

Yes, in Thunder Cash – Book of Ra you can ramp up the excitement and entertainment with the Lock-and-Spin feature. As the name suggests, certain symbols in this feature are locked in place while the other symbols spin again. In this way, it is possible to win the Mini, Minor, Major or even the Grand Jackpot. 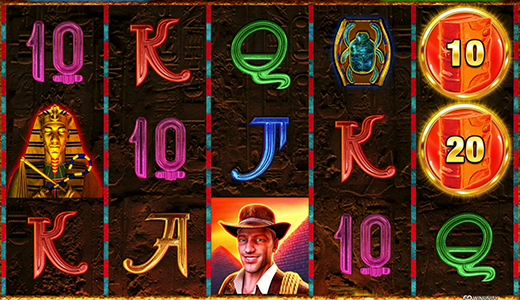