Reveal the secrets of how to claim divine winnings – it will be well worth your while!

The burial chambers deep within the pyramids are supported by huge stone pillars. The hieroglyphs they bear send a message to anyone who ventures inside: “Follow the mighty goddess and you shall be richly rewarded!” Are these words to be believed? Find out for yourself with Goddess of Egypt, the captivating slot dedicated to ancient Egypt that comes with seven reels and up to 117,649 win ways. Bonus symbols are on hand to help you trigger Free Games in which you could win big thanks to multipliers. And the Reel Refill function is also available to boost your chances of winning! Looks like that message is worth taking seriously after all...

Want to know more? Then work your way through the following game instructions, which include some useful tips.

Goddess of Egypt is an online slot machine with six vertical reels and one horizonal reel. The win ways setup means that each reel can display a different number of symbols every time you spin, resulting in up to 117,649 win ways being active at any one time.

To end a spin with a win, you need to get two or three matching symbols to stop on one of the win ways without interruption. Winning combinations must always start on the first reel on the left.

The game’s two bonus symbols, however, need not comply with this rule, which means they can generate winnings from anywhere on the reel set. And the Wild symbol can complete winning combinations.

Reel Refill – The Special Extra in Goddess of Egypt

Goddess of Egypt provides players not only with a huge number of win ways, but also exceptional game mechanics in the form of the Reel Refill function. This makes it possible for you to enjoy chain reaction winnings from a single spin of the reels. As a result, one stake could be enough for you to win a huge number of Stars. That’s because as soon as a winning combination is formed, the respective symbols disappear from the reels to make place for new symbols from above. This process repeats itself until no further winnings are achieved. A new round then begins.

The Symbols in Goddess of Egypt Online

As you would expect, the symbols in Goddess of Egypt match the antique theme. So, in addition to the classic symbols such as the 9, 10, Jack, Queen, King and Ace, there’s a Scarab, an Eye and a Statue. The Goddess herself is even a symbol and, understandably, the most valuable one in the game. Moreover, she can, unlike the other symbols, generate winnings by appearing just twice in a spin (instead of three times).

The Wild symbol, which only lands on the horizontal reel, can stand in for other game symbols and complete winning combinations.

The two bonus symbols are Scatters, and they have the privilege of not having to stop on the same win way to yield winnings for you. During the Free Games, they can also be spotted only on the horizontal reel.

Free Games in Goddess of Egypt – How to Trigger Them

The pyramids in Goddess of Egypt may be packed with Stars, but that’s not all. There’s something even more valuable hidden within: Free Games with an unlimited win multiplier! This begins at x1 and increases by one with every Reel Refill.

What is Goddess of Egypt?

Goddess of Egypt, an online slot machine with seven reels and up to 117,649 win ways, is a must for any fan of slots inspired by Egypt. Your aim in a burial chamber adorned with hieroglyphs is to line up as many matching symbols as possible along one of the win ways. Free Games can significantly increase your chances of success, and you can play them without having to place a stake.

Where can I play Goddess of Egypt?

The Egypt-inspired slot Goddess of Egypt can be played on Casino of Gold, the popular German online gaming platform. If you enjoy slots like this, we recommend checking out the following titles: Book of Ra deluxe and its many editions including Book of Ra deluxe 10 and Thunder Cash – Book of Ra!

Which special symbols are there in Goddess of Egypt?

First up, there’s the Wild symbol, which can stand in for any regular symbol to complete winning combinations. Then there are the Pyramids, which trigger Free Games in which you can win without having to place additional stakes. All you need is three of them to stop on the reels in a single spin to trigger the feature.

Can I win Free Games in Goddess of Egypt?

Yes, you require at least three bonus symbols. If they show up on the reels during a spin in Goddess of Egypt, eight Free Games with an increasing win multiplier are activated. You want more? If further bonus symbols appear on the horizontal reel, your free spinning fun will be extended. 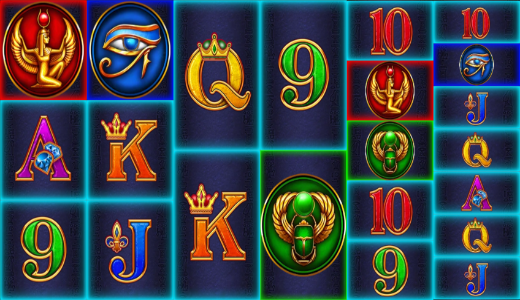