Your underwater adventure is entering a new phase – including Win Ways function!

Colourful corals, shimmering fishes and sunken treasures – this is the home and the realm of the sea god Poseidon. Here he rules over two reel sets and makes sure that each game symbol finds its place along the up to 251,957 win ways. However, you will only benefit if they land in the right order. The Trident and the Portal will give you a helping hand if your luck is in and boost your chances to win.

You can find all of the most important details about this game in the following game instructions:

Lord of The Ocean 10: Win Ways is an underwater slot with two reel sets each containing five reels. In total up to 251,957 ways to win are possible thanks to the Win Ways function. You’ll be a winner if you get three or more matching symbols in the right order. That means, your winning combination must begin on the first reel to the left and follow a win way. Moreover, this combination must not be interrupted by any other symbols. Exempt from this are the Statue, the Treasure Chest, the Mermaid and the sea god Poseidon.

The Symbols in Lord of The Ocean 10: Win Ways Online

Lord of The Ocean 10: Win Ways enchants with many high-definition symbols in an oceanic design: a sunken Statue, a Treasure Chest at the bottom of the sea, a Mermaid and the sea god Poseidon. And they are joined on the reels by the classic game symbols 10, Jack, Queen, King and Ace.

The Trident acts as Wild symbol in the game. It can substitute for other symbols (except for the Scatter) and is automatically transferred from the first to the second reel set.

The Scatter is represented by a Portal symbol. It can trigger wins without having to land on a win way. Although it is important that the right amount appears. This is also crucial for the activation of the Free Game feature.

The Free Game Feature in Lord of the Ocean 10: Win Ways

The Free Game feature in Lord of The Ocean 10: Win Ways provides amazing entertainment. It is triggered by at least three Scatter symbols that appear at the same time on the reels during a spin. You then earn eight Free Games in which you can continue the hunt for sunken winning treasures – without having to place any further stakes.

Moreover, at the start of the feature a special symbol is selected that can spread to the entire reel it lands on. It is then automatically transferred to the second reel set where it emerges as a stacked symbol and scores a win even when it doesn’t land on adjacent positions.

FAQs: Important Questions About Lord of The Ocean 10: Win Ways

What is Lord of the Ocean 10: Win Ways about?

In Lord of The Ocean 10: Win Ways you need to line up as many matching symbols as possible along up to 251,957 win ways. The underwater slot by Greentube provides two reel sets for this with five reels each as well as plenty of ocean-themed game symbols. Furthermore, get ready for a special expanding symbol and extra chances to win thanks to the Free Game feature.

Where can I play Lord of the Ocean 10: Win Ways?

On Casino of Gold, of course! Besides the thrilling underwater slot Lord of The Ocean 10: Win Ways you find many more online slots here that are located in the ocean. Fancy a dive? In that case we recommend Dolphin’s Pearl deluxe. If a boat trip with pirates is more to your liking you might want to check out Captain Venture or Smugglers Gold.

Are there special features in Lord of the Ocean 10: Win Ways?

Yes, the Free Game feature. It is activated when three Scatter symbols are simultaneously visible on both reel sets and grants you up to 20 Free Games. During the latter a special expanding symbol might boost your chances to win because it can fill all positions of a reel. The special symbol is determined at random.

Which symbol should you look out for in Lord of The Ocean 10: Win Ways?

Definitively the Trident. It is the Wild symbol and can substitute for other symbols (except for the Scatter) and complete winning combinations. But the Scatter represented by a Portal is also important. It can trigger wins in any position and activate Free Games. 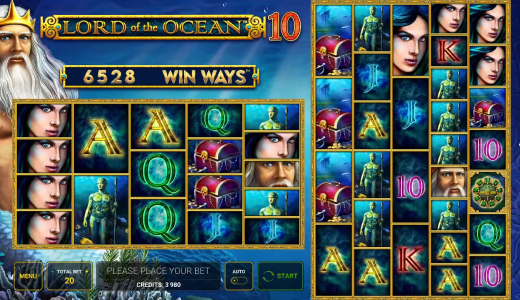