When it comes to retro charm, this fruit machine knows no limits!

Once you’ve spun the reels of Super TopSpinner, you’ll know why this legendary AWP slot is so popular. Thanks to the five different game modes on offer, you can choose from one round to the next on how many reels and win lines you want to try your luck. On top of that, the Super Bet function gives you an extra chance of winning: several Free Games can be triggered by it – over and over again.

Curious to find out more? The following game instructions will tell you everything you need to know.

Super TopSpinner is a fruit slot that can be played in five different modes. The number of reels and win lines differs from one mode to the next:

No matter what mode you play in, three or more symbols along a win line produce winnings for you. The only exception to this rule is the Super Bet feature with its bonus rounds. But more on that later.

In this game, both your bets and winnings are represented by coins, the value of which is determined by you in the stake settings.

In addition to the usual winnings display below the reel set, you’ll see what you have won in the Super TopSpinner at the top. Moreover, all winning combinations are shown, which means you don’t need to open the game menu to see them. When you achieve a win, the corresponding combination and line light up, showing you how you managed it.

The Symbols in Super TopSpinner Online

Super TopSpinner features a host of colourful fruit symbols: Pears, Plums, Melons, Grapes, Oranges and Strawberries can create the sweetest of winnings in the right combinations. The Bell and 7 are also along for the ride.

But it’s the Star that has special powers, for it is the Scatter, enabling it to generate winnings regardless of the win lines. But that’s not all, as it can also trigger Free Games, provided the Super Bet function is activated. Unlike in most other slots, however, the Star Scatter isn’t free to spin alone – it takes a ride on the back of other symbols.

The Super Bet Function in Super TopSpinner makes it possible to trigger Free Games. Simply click on the corresponding button directly below the reel set to activate the function.

To achieve winnings in this feature, the symbols DO NOT have to land along a win line – as long as enough appear in a single spin side by side on the reels, you’ll be a winner.

Super TopSpinner is an online slot in which three matching game symbols must stop on one of up to 25 win lines for winnings to be generated. Between four and seven reels – depending on which game mode is selected – offer up ample reel estate for this to happen. And with the Super Bet function, it’s possible to trigger Free Games that will make winning even easier.

Where can I play Super TopSpinner?

The iconic fruit machine Super TopSpinner can be found on GameTwist – the hit German online gaming platform. And the fruity retro slot is joined there by a host games with similar themes and features. We recommend getting started with Random Runner, Random Runner VIP+ and the fiery classic Sizzling Hot deluxe.

What’s so special about Super TopSpinner?

One thing that makes Super TopSpinner stand out are its visuals and layout. All of the winning combinations are displayed above the reel set along with the sum you just won. As a result, you can easily see all of the important game details at a glance.

It is possible to trigger Free Games in Super TopSpinner?

Yes! For this to happen, the Super Bet function must be activated when up to three Scatter symbols stop on the reels. They then trigger eight Free Games during which symbols need not follow a win line to generate winnings for you as long as they stop on the reels side by side. As a result, your chances of winning are even greater! 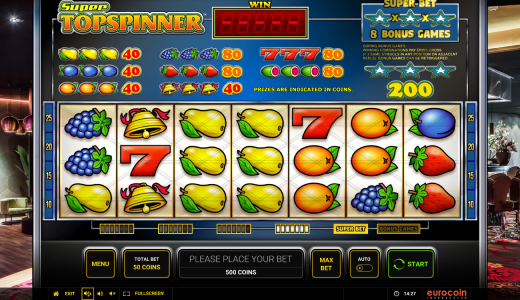